Our Ionic foot detox is designed to remove charged toxins from the body through pores in the feet. Here’s how the process works – A bath of water, sea salt and a chemical array are charged with AC/DC current to separate the neutral water molecules into charged positive and negative (hydrogen and hydroxide) particles. The particles collect acidic, charged toxins from the body and pull them out of the body by osmosis (through a membrane from a low concentration to a high one). Each type of toxin produces different colour in the water after it is removed and is associated with the areas of the body that the toxin was pulled from. 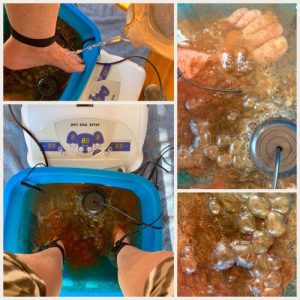 Toxins removed from the urinary tract and kidney–and from the prostate or vaginal areas–turn the bath water yellow or yellowish green. Dark green water indicates the presence of gallbladder toxins. After these toxins are completely removed, the water becomes clear again or changes to a different colored toxin removal.

White coloring indicates clearance of problems in the lymphatic system, which is the system of passages that help the immune system distribute cells throughout the body. White particles that appear cheese-like indicate problems with yeast that are being removed.

Red colouring in the water, including red flecks, indicate removal of toxins associated with blood clotting and blood disorders, such as anemia. Similarly to other toxin removal, clearing of the water after red discolouration indicates that problems associated with that body area have been resolved.

Although discolourations are associated with the above-listed colours, the colours vary based on body composition, metal contents of the water in the area in which the person lives and diet. Repeated treatments may be necessary to ensure removal of all types of toxins. People with electrical implants, such as defibrillators, pregnant women and patients taking medication for organ transplantation or seizures should not use the ionic foot bath.

In summary here are some of the benefits: